With my rom-com post of Weekly Shonen Magazine being one of my biggest surprise for my blog, I decided to share my thoughts on the new series introduced to the lineup for the first 6 months.

To the surprise of the English speaking community that is aware of any manga magazine outside of Weekly Shonen Jump, the rom-com invasion surprisingly paid off with only one of the rom-com (the RPG witch) getting axed due to being the only one that didn’t have a (technically) real-life rom-com as a setting, while the new serializations of 2017 (including non rom-coms like Revengers & Runway) that survived ended up having the commercial appeal to be placed at the Top 50 Oricon Sales for at least one week.

The biggest success story for the line-up: Haruba Negi’s Go-Toubun No Hanayome (or should I say The Quintessential Quintuplets), where the readers are charmed with the simple idea of the Japanese same face syndrome used in a so simple its unique way (and potentially marketable if America or Israel somehow took hold of it), a strong main cast with a solid storyline (for now) and garned a lot of attention from 4chan, Reddit and other international manga websites that Kodansha give it the green light for it to be licensed in English digitally just under a year of serialization. Congratulations Negi as 4chan can now memorize your name.

Overall, a great track record for magazine right now and can be argued that it is the strongest lineup in the magazine right now, as they are in a period where not only they snatched & maintained, mangakas with promising potential (veterans and newbies which includes Mashima himself), enable the mangakas to finish their work without having to rush for an ending and most importantly, got their series selling well, which is the most important thing.

P.S: I didn’t say that it is the best when it comes to story quality, since there are still too many rom coms in the lineup & one of them includes Reihi Miyajima’s Kanojo, Okarishimasu (who everybody & their grandmothers love to hate-read and nobody is hit by a truck yet) and Kouji & Mashima aren’t the mangakas where the English speaking community are in the rage about.

Without further ado, the current serializations of 2018 along with my thoughts on these series. Warning, spoilers ahead. 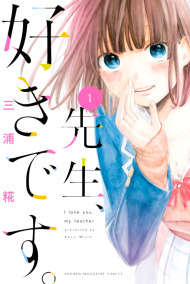 While the timeline seems to be cheating (it is technically not a 2018 series after all), it is a series serialized a week before The New Year and I didn’t include it in the rom-com

Synopsis (according to me): A homeroom teacher specializes in the Japanese is suddenly confessed by a student of his and just before the end of the first chapter, another girl openly confess in front of him by writing in the chalkboard. Hijinks ensues.

Thoughts on The Volume: A basic cover where Ichikawa whispers to us in how she loves us.

My Thoughts: While I know it is a winner in one of the Magazine Pocket competitions that enables it to be serialized, I don’t know why it is allowed in this particular magazine when not only there is a ridiculous amount of rom-coms in this lineup, but specifically it is competing against teacher fetish in Domestic Girlfriend (to be fair, Hina is no longer a teacher at this stage) and teaching in the Quintessential Quintuplets (to be fair, the teaching aspects here is tossed to focused on the relationship between each other). While I heard it sells a good amount (20k for a newcomer), with Eito gone and being a newcomer its position is not that stable right now.

As for the story itself (me reading this in Chinese), it’s somewhat unique where in Chapter 5 the MC is willing to face his confessors head-on into potentially dating one of them, but it is a rather basic rom-com. And with nearly half the magazine being all real-life romcoms, it’s just not good enough for me to take an interest in it.

P.S: Due to the potential differences in the Japanese language, he is not the author of the historical manga Examurai Sengoku. Though it would be cool he did though, would explain the integration of Japanese language into the story.

Another P.S: When Moe-Shit’s Uwaktere has started translating this to English, Kodansha decided to move this to Magazine Pocket since the while it isn’t a hit, the sales are good enough to let the manga continue.

Sypnosis: Koyomi Araragi, a third-year high school student who survived a vampire attack, finds himself helping some girls involved with all kinds of apparitions, deities, ghosts, mythological beasts, and spirits.

Thoughts on The Volume: It’s Oh! great. Kodansha, why do you let him stop at a very ho-hum showing on Senjouhara?

My Thoughts: It’s Bakemonogatari (even though I didn’t watch the anime series that much), what can I say more other than it is going to make Kodansha bank in the future?

Also, thank god Oh!great is doing this because even the first chapter of Bakemonogatari is insanely well done with its placements of objects & words into crabs, bats, and pure awesomeness. Another good thing whereas Bakamonogatari is considered a giant on its own, Oh!great won’t be tempted to derail plot lines into abstract Picassos…like Biorg Trinty (didn’t read Air Gear and Tenjiho Tenge yet, I am confused by the plot even in the first chapter and he’s not even the writer).

Synopsis: 1 year after a coma, a world class skater found himself in the bottom with all his memories as a skater lost without a trace. Not wanting to lose without a fight, he decided to take on staking again starting from the beginning.

My Thoughts: If it wasn’t for Oh!great, this is easily my favorite mangaka when it comes to art style. In some chapters you got a typical scenes where character follows the scripts and when it comes to the big guns–BAM! Art bomb, where suddenly the style shifts into a unique high gear that feels only unique to him (alongside some beautiful cover pages like this one below).

While the art and the story could cover the emptiness after experiencing Yuri On Ice, the story itself can be rather slow at times (and I felt that giving the MC with a mentor who at least provides the foundations would have helped him a lot more), in fact Chapter 2 is all about him helping a girl to give up on competitions just to make an enemy of her father, who is the chairman of the national skating committee. Even though the first volume hasn’t been released yet, seeing it having its first low TOC placement (which actually matter when it comes to being considered for cancellation) make me scared of its future.

Sports manga is now a high risk, high reward when a mainstream manga magazine is involved. Therefore I hope that it will be a decent pillar in the magazine and hopefully somebody would try a hand in its scanlation. 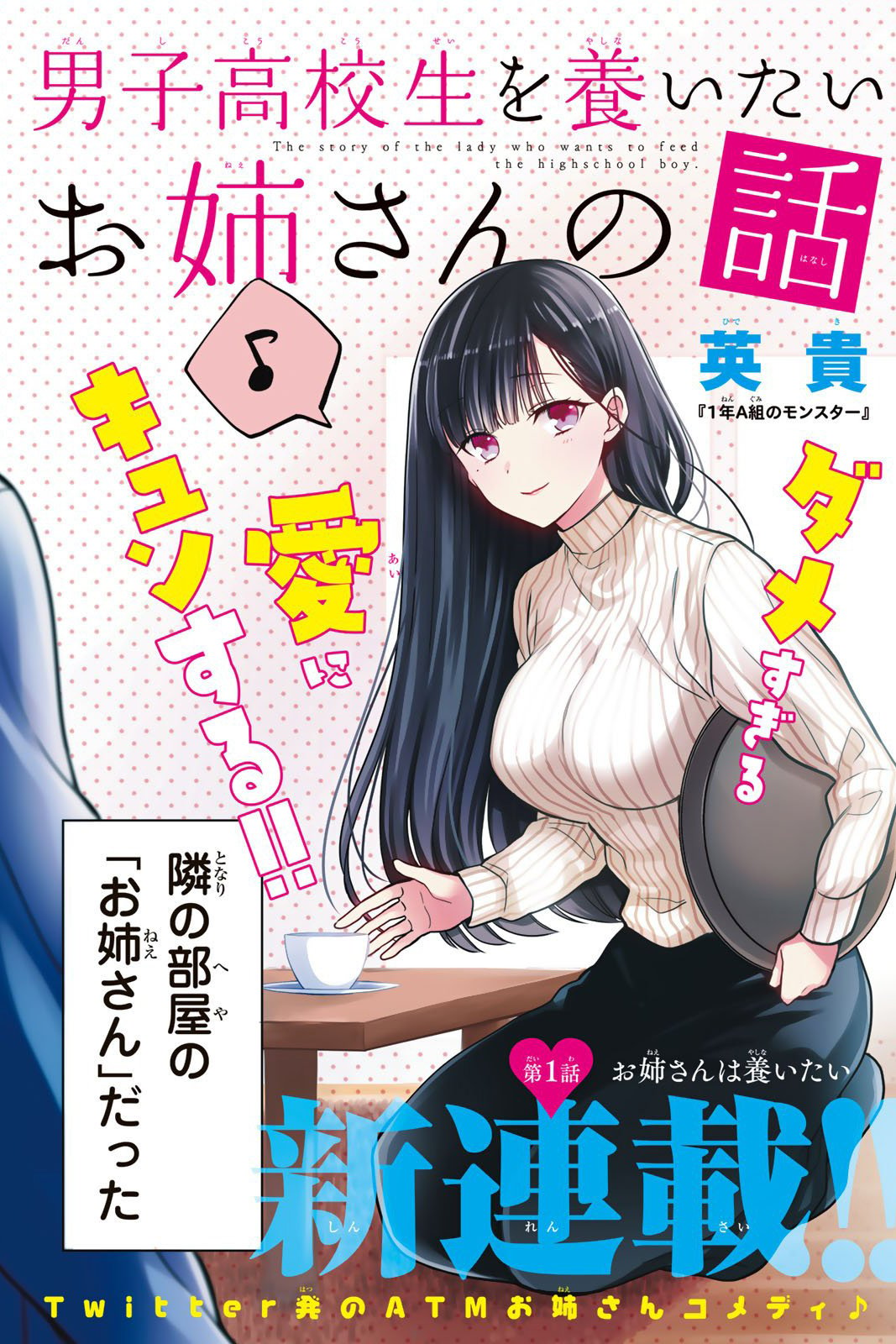 Sypnosis: When his parents ran away with debt and is in the verge of having his organs sold out, Soramoto Minoru is saved by an “Onee-San”, who is so obsessed with him for no good reason. Hijinks ensues.

My Thoughts: Pre-serialization it has a large following in Twitter and currently at MangaDex the view count is at 100k

P.S: Despite the tiredness of rom-coms and isekais, those two genres are extremely popular with that particular fanbase in MangaDex. Additionally, 7 (or 6 if you want to discount Darling in the FranXX) are about romance.

This Man (Who Brings Death To Those That Saw His Face)

Synopsis: Forensic Artist (and Patrol Officer) Amano Hakaru found himself in a tough case connected with This Man, a serial killer in this story and is now targeting Akesato Hoshiko (a middle school girl who is good at recognizing emotions of people), as she’s a witness to him killing her mother in cold blood.

Story based on this urban legend: http://www.thisman.org

My Thoughts: Interesting if the manga also focuses on Amano’s side as a forensic artist (which is a rare occupation to be written in manga) and the urban legend is internationally well known enough to have a small global following like the urban legend itself. However, on its own, I don’t think that having “This Man” as a case is solid enough to span for more than 10 volumes.

P.S: While Koji Megumi is a solid name when it comes to the manga world (Acma Game & Bloody Monday), the story is actually written by Hanabayashi Sora, who has a hand in the Occultic Nine manga (occult thriller, I only heard of it when I wanted to provide a detailed look for this manga).

Synopsis: The fantasy series takes place during Japan’s Warring States Period, where Japan is ruled by oni. A 15-year-old boy named Musashi will stand up to oni with the help of a certain special power.

My Thoughts: I know Magi is a classic, even before I started to become a manga reader. But for this new series, I somehow find the story weak and the first chapter is so bizarre with the amount of genres banging against one another without making any sense (Historical Figures, Oni, Motorcycles, the last one makes me wanted to drop this after the first chapter). Since it is Ohtaka it’s ovbious it is going to be big, but so does Makoto Raiku and look what happened to him after Vector Ball.

Although my gripes on this manga is more about my reluctance on the historical genre, which for me is a hard genre to combine with some supernatural elements without making me frustrated in disbelief.

These are the new 2018 serializations for Weekly Shonen Magazine, comment your thoughts after you have thoroughly enjoyed the introduction.