Skip to content
HomeThoughts On Some Mangas of Weekly Shonen Champion on 2018.

For an international manga community, as a spokon Wataru Watanabe’s Yowamushi Pedal is one of the most well-known (thanks to the anime). It solidified a standard where other publishers need to think twice before serializing a cycling manga, tick all the boxes that makes it commercially viable outside the fujoshi market and sold relatively well in spite of being serialized in this magazine (locally and globally) I bring up right now, and the reason why YowaPedal is always at the top of its table of contents. However, this post I’m not talking about this manga itself, but the magazine the manga is serialized, Weekly Shonen Champion by Akita Shonen.

P.S: For the manga itself, I did like the start and the first Interhigh, but man, almost 200 chapters just to finish an entire Interhigh is wearing me down even with the good cast interactions. Thus I stopped before the second Interhigh.

According to Wikipedia, Weekly Shonen Champion was first published 15 July 1969 and some of the well-known serialized works consisted of Osamu Tezuka’s Black Jack, Keisuke Itagaki’s Baki The Grappler franchise and Masami Kurumada’s Saint Seiya franchise (the latter 2 still have their serialization ongoing).

Now, the magazine itself is still not internationally well-known even with YowaPedal and Eiji Masuda’s Jitsu Wa Watashi Wa (a really great supernatural rom-com that ends satisfyingly). Part of my reasoning for me, is that until recently for some time a part of the line-up focuses on delinquents (like Hirakawa Tetsuhiro’s Clover, Masami Hosokawa’s Sugarless and Toshio Ozawa’s Nanba series) that covers the lack of fantasy shonen action series and for the TOC itself, you would have noticed that YowaPedal and Baki will always dominate the top position of the TOC (along with the digital section of the cover pages), not helping that most series from this magazine struggled to reach even 10k of physical sales.

With that said, scanlators did translate some of their newer series into English and Chinese for the readers’ consumption, so here are some works (from A to Z) I would like to introduce and give my thoughts to those picked mangas.

First, spoilers alert. Second, my usual reads are idyllic things that don’t give me nightmares for some moments. 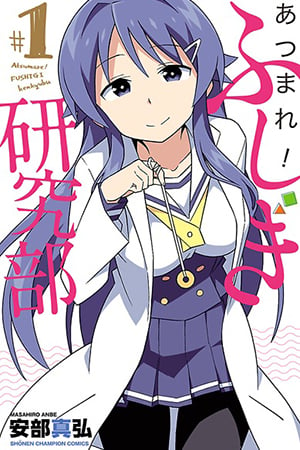 Summary: Goryo Daisuke is still unsure about which club to join. When he meets the three girl members of Mysterious Research Club while looking for the school’s warehouse, he gets hypnotized to sign the registration form. Suzu who is obsessed with scary curses, Chiaki who only relies on her monstrous strength to perform dangerous magic tricks, and Kotone who can control people by hypnosis.

Thoughts About The First Volume: Aside from showing the girls (here we have the elegant enough to have a school fanbase Kotone hypnotiszing us to read this manga), there is also some background patterns that resembles their expertise. Other than that, too simple.

Thoughts About The Manga: A relatively inoffensive slice of like work before inevitably developing into a harem series (more girls are obviously coming to make at least 6 volumes), a landscape that the Squid Girl’s author hasn’t really gone on yet. Currently, read this in Chinese. 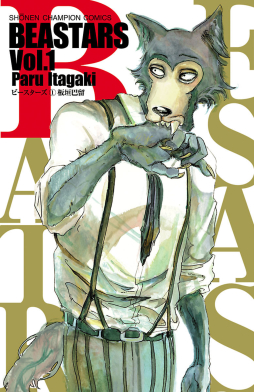 Summary: In a world populated by anthropomorphic animals, herbivores and carnivores coexist with each other. For the adolescences of the Cherryton School, school life is filled with hope, romance, distrust, and uneasiness. The main character is Legosi the wolf, a member of the drama club. Despite his menacing appearance, he has a very gentle heart. Throughout most of his life, he has always been an object of fear and hatred by other animals, and he’s been quite accustomed to that lifestyle. But soon, he finds himself becoming more involved with his fellow classmates who have their own share of insecurities and finds his life in school changing slowly.

Thoughts About The First Volume: Like the other volumes it shows the major characters in the series (here we have our main protagonist Legosi), though as the volume covers go on it got more whimsical in the contrast or brightness.

Thoughts About The Manga: This series premiered in the same year as Zootopia (the latter is released in February 2016 as the earliest), though I watched the movie way later at an airplane in 2017 (from another passenger’s seat) even with my best attempts to avoid it. Which you might get the idea that I’m hesitating to start this manga at all, mostly because of the furry fanbase.

When I do start this manga in 2018, I was blown away by the narrative. I love the tone by the author’s attempts to maintain her style (mainly, having a shoujo or josei setting in a shonen magazine), I like the world building making the beastmen interact with each other (mainly between carnivore and herbivore) and most of all, the psychological introspections when the characters are faced with going against their primal instinct of being an animal. A deserving victory for the 2018 Manga Tashio award.

P.S: I still think that it is more josei than shonen and stop asking myself whether this mangaka is the daughter of Keisuke Itagaki.

Summary: Pinch server Shimodaira Kanna enters high school with the hopes of appearing regularly in volleyball matches even though he sucks at everything aside from serving. The club he enters has three other formidable first years. But that’s not all, even the older members look like a strong team. Will he get his chance to shine?

Thoughts on The First Volume Cover: Standard, though I did like that for the latter volume the mangaka starting to improve the quality of the cover even at the second volume.

Thoughts on The Manga: Despite fully reading the available chapters scanlated in English (which is about 30 chapters more than Haikyuu), I can understand why it struggled to get noticed. Too much focus on volleyball and volleyball matches (though the matches itself are quite decent), not a lot of downtime even in the beginning and the girl manager introduced late is just here to fall for the main character. If you wanted a preparation pack before starting Haikyuu, it is still a decent alternative.

Summary: Suzuki Iruma, who has been sold to the demon by his irresponsible parents in exchange for money. Surprisingly, next thing he knows, he is living with the demon and has been transferred into a school in the Demon World. We invite you to follow Iruma-kun’s extraordinary school life

Thoughts on The First Volume Cover: We have Iruma innocently sitting on the (possibly) devil king’s seat with the devils surrounding him, giving us the realization that he is maybe is a devil in a human clothing or a victim who just been thrown into the crown due to circumstances. Another thing is that it is very different from the subsequent covers, showing us the major characters with Iruma interacting in the background.

Thoughts on The Manga: I fully read the available chapters in Chinese and the translators have a lot of fun commenting on the scenes, which is fun. I like that it is not just going for a gag manga at first where Iruma do something that makes the demons respect him (can’t blame them as Iruma is not really a normal person, he eats thrice his body size and evade as fast as Koro-sensei) and making it a story of him improving his ranks as a demon (actually prompted by the school council president when discussing about ideas and dreams). One thing I do not like is that the just recently, there are 2 consecutive personality change arcs (the first with the school council president and the second with Iruma himself), a bad case of creativity block. I still recommend this if you like to start reading a school comedy.

Summary: Rokudou is a loser, and everyone knows it. He gets picked on at school, gets snide looks from passersby, and can only muster up the courage to complain in secret with his equally hapless friends. Looking to turn his life around, he desperately uses an ancestral artifact passed down in his family for generations: a scroll that is capable of subduing all demons. However, in the modern age, it has a different effect: it makes all bad girls fall in love with him.

Thoughts on The Volume Cover: Do you see the red string of love surrounding the girls? It actually follows to the subsequent covers with the bad girl of the arc..until the mangaka realizes that he made some arcs too long for another bad girl of the arc to appear in his volume, so now he insert major characters-guys and girls not really fall for Rokudou’s magic, that shouldn’t even be connected to the red string of love, which hampers down the effect on the volume.

Thoughts on The Manga: A work where I have to apologize for not really reading because I’m really put off by the delinquent genre and the art style at the start, even though it is praised for the male supporting cast that actually delivers despite the harem genre and Rokudou have actual reason not to feel wary about girls were actually in love with him. Though I did read the third arc (motorcycle princess speed runner), which is cool and some of the downtimes of the cast interacting with each other is cool. 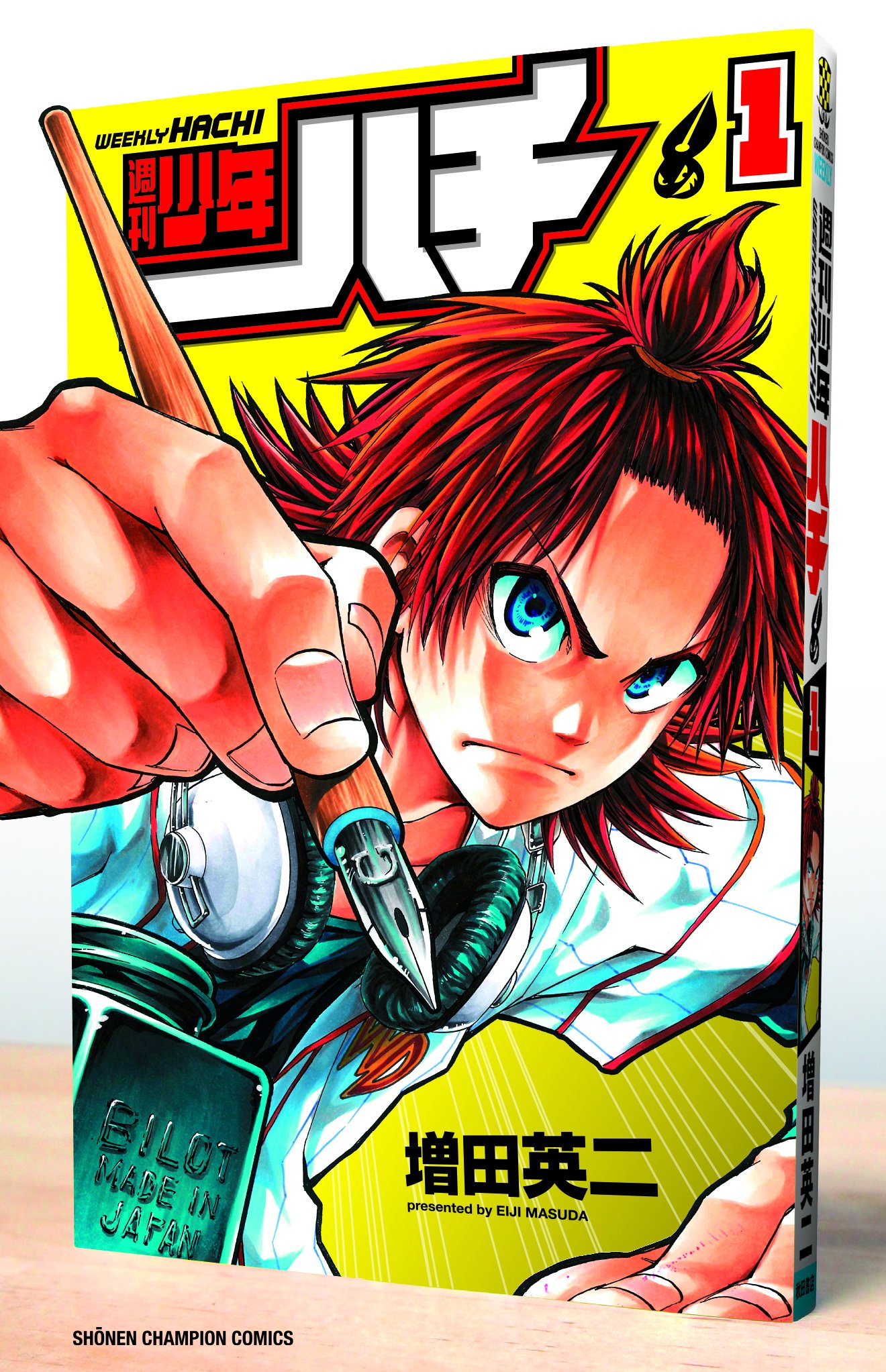 Summary: Fresh out of high school, Yasaka “Hachi” Hachiki enters the infamous Onigahama manga academy in the hope of becoming a pro mangaka. Well aware of his lack of talent, Hachi soon meets Mikeya Touma, a young prodigy who nonetheless thinks he has a long way to go. Despite the gap in their abilities, an incident suddenly sparks a rivalry between the two of them. Thus begins the tale of Onigahama’s students and their merciless struggle to achieve their common dream.

Thoughts on The Volume Cover: Took me a while to realize the entire manga is photographed into a cover, while is very unique. Still, the white background is jarring and lame, at least make the background a comic bookstore.

Thoughts on The Manga: Already said that I really liked Jitsu Wa Watashi Wa, but I find it very slow at first and putting Hachi into Class E without being directly shown (example, pages of his work like Roman in Sket Dance and even the girl’s page in Hitman) is a tough swallow and just feels like he is doing a reset button for Hachi.

Though it is starting to warm up, with individual characters starting to shine around him and starting to develop him as a character and the first assignment on Class E is fun (with the Nazca’s Lines inspired page not being at the climax). Though for a manga that is supposed to focus on drawing manga, there is a lack of actual teaching.

–
While there are still some more mangas in the magazine that hasn’t been introduced by me, 6 is the appropriate amount for me to stop. What are your guys’ thoughts on the mangas listed above?